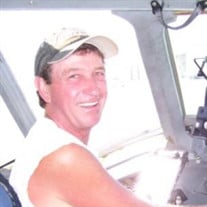 It is with a heavy heart that we announce the death of Keith Allen Stokes. He left this world Wednesday, October 13, 2021 at 7:50 am in Carbondale Memorial Hospital. Keith was born to Rip and Gloria Stokes, of Carbondale on January 18th, 1952. He grew up in a household full of family and friends and various pets, including a multitude of snakes he had sneaked in to the basement. Keith’s little brother Paul called Keith, “Keefy” which often came out sounding much like “Beasty” and the name stuck due to his affinity for all manner of beasts. Keith was a friend to everyone he met. His big heart was irresistible and to know him was to love him. Keith served in the military in the early 1970’s. His favorite story was one of purchasing books in Germany and not of war. He was a logophile who enjoyed crossword puzzles and excelled at solving them. He was quietly intelligent and only those who knew Beasty well, knew how brilliant he really was. He was also an avid golfer and even made a Hole-in-One at Midland’s Golf Course on hole number 2. He rooted for the Cardinals and rarely missed watching a game. Keith enjoyed working in his gardens and loved to see the wildflowers grow. He enjoyed the company of he and Ginger’s many cats who kept his bed and his heart warm. He kept his bird feeders full and even made sure the local geese and raccoons had plenty to eat. His laugh was unmistakable and his presence will be sorely missed. Keith worked for the Carbondale Post Office until retiring in 2004 during which time he made many life-long friends. He and his first wife, Debbie Kohlbacher, brought into this world two children, Ryan and Holly, who meant the world to them both. Keith married Ginger Smith in 1992 and together they made a formidable golf team and a shining example of two best friends and soul mates for almost 30 years. Keith is preceded in death by his mother, Gloria Stokes and his father, Robert “Rip” Stokes. He is survived by his wife Ginger Stokes; his son, Ryan Keith Stokes (wife, Krissy; his daughter, Holly Swoape (husband, Brent); his brother Robbie (wife, B.J.); his sister, Suzan Schwegman (husband, Jeff), his brother, Paul (wife, Michelle), his sister, Teresa McCarthy (husband, Tim) and four grandchildren; Ryder, Riley, Roxy and Jacob. He is also survived by his nieces and nephews; Robby (wife, Katie and their children, Henry, Amelia, and Madelynn), Carmen (husband, Anthony), Scott, Jack, Rory, Megan, and Collin. Per Keith’s wishes he was an organ donor and his contributions improved the lives of many others upon his passing. He is cremated and interred within an urn. A Celebration of his Life, hosted by the family, will be Friday, October 22, 2021 at Jackson County Country Club at 1:00 pm, 5776 Country Club Road, Murphysboro IL 62966. Crain Pleasant Grove-Murdale Funeral Home is in charge of arrangements.

It is with a heavy heart that we announce the death of Keith Allen Stokes. He left this world Wednesday, October 13, 2021 at 7:50 am in Carbondale Memorial Hospital. Keith was born to Rip and Gloria Stokes, of Carbondale on January 18th, 1952.... View Obituary & Service Information

The family of Keith Allen Stokes created this Life Tributes page to make it easy to share your memories.

It is with a heavy heart that we announce the death of Keith...

Send flowers to the Stokes family.