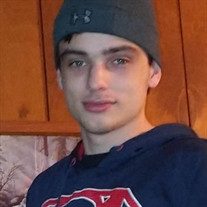 Kevin James Adams, age 21, of Cape Girardeau, Missouri, formerly of Marion, Illinois, passed away on Tuesday, December 21, 2021 in Cape Girardeau. Kevin was born on March 6, 2000, in Elgin, Illinois, the second son of Shawn and Linda (Hunting) Adams. He was an honor student at SEMO and would have received his Bachelor’s Degree in Accounting next December. Kevin was very athletic, and particularly enjoyed hiking, running and weight lifting. He was a very independent and self-motivated person. He worked at various restaurants putting himself through school. While Kevin was a very focused man, he was also very fun-loving. He enjoyed playing video games with his brothers and friends. He was also actively involved in local politics. Kevin was a member of Lake of Egypt Christian Church in Marion. Survivors include his parents, Shawn and Linda Adams; four brothers, Brian Adams of Bozeman, Montana, Jason Adams of Marion, Logan Adams of Marion and Aaron Adams of Marion; and numerous other relatives and friends. Cremation rites will be accorded at the family’s request. The family will host a memorial service at Lake of Egypt Christian Church in Marion on Sunday, December 26, 2021 at 2:00 p.m. with Bro. Leroy Waggoner officiating. A time of visitation will be held at the church on Sunday from 1:30 p.m. until the service. For those who prefer, memorial contributions may be made to the Adams Family, in care of Crain Funeral Home, P.O. Box 595, Energy, Illinois 62933. Crain Funeral Home-Egyptian Chapel in Energy has been entrusted with the arrangements.

The family of Kevin James Adams created this Life Tributes page to make it easy to share your memories.

Send flowers to the Adams family.