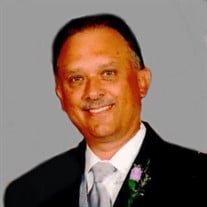 Kyle Dean Kern, 62, of Dongola, Illinois, reached out for his Lord and Savior’s hand and was taken to his much-deserved heavenly home on Monday, November 30, 2020, at the Lourdes Hospital in Paducah, Kentucky. Kyle was born February 25, 1958 in Mt. Vernon to Reverend John and Lydia (Wells) Kern. Kyle accepted the Lord Jesus Christ as his personal savior at young age and used his gifts of teaching, compassion, his willingness to help others, even strangers, and praying with so many in need that also served as his testimony to countless others. In his youth years he was a member of the Challengers Quartet and continued to use the most beautiful tenor voice the Lord had blessed him with at Shawnee Community College and Southwest Baptist College. Kyle was an active member, deacon and music director at the First Baptist Church in Dongola for many years. The following was Kyle’s favorite verse, in which he wholeheartedly believed in: “I can do all things through Christ who gives me strength” from the book of Philippians, chapter 4, verse 13. He was a graduate of Century High, Shawnee Community College, Southwest Baptist College, Southern Illinois University, and Eastern Illinois University. Kyle was an EMT for the Pulaski County Ambulance Service for many years. He became a correctional officer then educator for the Illinois Department of Corrections until his retirement. When our country was attacked on September 11, 2001, his students asked him what they should do. Kyle told them we must pray, and he said he looked around and every student had their head bowed. This is just another testament to this wonderful Christian man. Additionally, over the course of many years, Kyle was a part-time instructor for the Shawnee Community College where he continued to teach until his untimely illness and passing. He enjoyed watching Cardinal baseball with his daughter, Gracie. Kyle was united in marriage to the love of his life, Cynthia Lingle on June 26, 1982 at the First Baptist Church in Dongola and she survives. To this union were two daughters, who were the light of his life and to whom he was so proud of: Erica Rachelle (Jacob) Poat and Gracen Elisabeth Kern; two precious grandchildren who he adored: Carson Dean and Aubrey Jo Poat, all of Dongola. Additional survivors include three brothers, Randy (Teresa) Kern, Terry (Ivy) Kern, of Olmsted, Jeff Kern of Perks, and one sister, Debbie (Tracy) Meyer of Cypress. His brother-in-law, Roger (Rosalind) Lingle of Dongola, sister-in-law, Pamela (Loren) Ferguson of Anna, and brother-in-law, David Lingle of Austin, Texas; an Aunt, Maribelle Sweetin of Flora, Illinois; many nieces, nephews, cousins, colleagues, and so many dear, dear friends. He was preceded in death by his parents, Rev. John and Lydia Kern, a sister-in-law, Janet Johnson, and his special family, Barney, Jo and Jan Porterfield. Graveside services will be held on Saturday, December 5, 2020 at 11:00 a.m. at the Friendship Church Cemetery in rural Dongola with Reverend Paul Sadler officiating. Memorials may be made to the First Baptist Church music fund. Crain Funeral Home in Dongola is in charge of arrangements.

Kyle Dean Kern, 62, of Dongola, Illinois, reached out for his Lord and Savior&#8217;s hand and was taken to his much-deserved heavenly home on Monday, November 30, 2020, at the Lourdes Hospital in Paducah, Kentucky. Kyle was born February... View Obituary & Service Information

The family of Kyle Dean Kern created this Life Tributes page to make it easy to share your memories.

Kyle Dean Kern, 62, of Dongola, Illinois, reached out for his...

Send flowers to the Kern family.