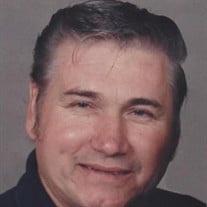 Larry Cullum, 77, of Pittsburg, passed away on Thursday, February 4, 2021 at 9:20 p.m. at home with his wife by his side. Larry was born on September 26, 1943 in Aurora, Illinois. Larry married Brenda (Short) Cullum October 21, 1961 in Herrin, Illinois. They shared over 59 years of marriage. He enjoyed fishing, car racing, and spending time with his grandchildren. Larry was a member of First Church of God in Herrin, Illinois. Larry and his wife own and operate Murray’s Body Shop in Herrin, which his wife will continue to own and operate. He is survived by his wife, Brenda Cullum; sons: Steven (Shelly) Cullum of West Frankfort, Illinois, Jerry Cullum of Marion, and adopted daughter Shiela Cullum of Marion; brothers: Ken Cullum of Johnston City, Ron Cullum of Pittsburg, Mike (Rene) Cullum of Creal Springs, and David (Karen) Cullum of Johnston City; grandchildren: Candice Cullum of Herrin, Steven Marcus (Yevette) Cullum of Colorado, Angel Cullum of Johnston City, Jamie Cullum of Johnston City and Jerry David Cullum of Orient, Dylan (Jessica), Brandon, Cody and Lexis Presley of Johnston City. Larry also leaves his brother-in-law, Terry Short of Blanco, Texas. Larry was preceded in death by his parents, Claude and Avis (Jennings); and a granddaughter, Leslie Cullum. Funeral services will be held at Crain Funeral Home – Egyptian Chapel, Energy, Illinois on Tuesday, February 9, 2021 at 1:00 p.m. A private interment will be held in Egyptian Memorial Gardens. Visitation will be held at Crain Funeral Home – Egyptian Chapel on Tuesday from 12:00 p.m. until the time of service. For those who prefer, memorial donations may be made to First Church of God, Herrin and will be accepted at the funeral home.

The family of Larry Cullum created this Life Tributes page to make it easy to share your memories.

Larry Cullum, 77, of Pittsburg, passed away on Thursday, February...

Send flowers to the Cullum family.