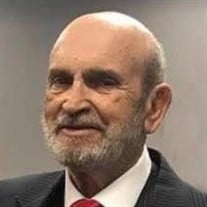 Leo Thomas Sheets, age 79, of Herrin, passed away on Wednesday, May 5, 2021 at 4:29 p.m. in Memorial Hospital of Carbondale. Tom was born on December 28, 1941 in Fulton, Missouri, a son of Leo T. and Freda (Shelby) Sheets. He married Mildred Marie Courier on November 26, 1964, and she preceded him in death on March 25, 2021 after 56 years of marriage. Tom retired after working for over thirty years for General Telephone & Electric. During his time with GTE, he was a regional 911 coordinator and was in charge of the expansion and modernization of the regional 911 system. He faithfully served his country in the United States Army from 1960-1963, serving with the 82nd Airborne. Tom loved animals, playing golf, gardening, hunting and fishing. He was an avid Cardinal fan, but most importantly, he loved spending time with his family and friends. Survivors include his son, Timothy Sheets of East Peoria; two daughters, Melinda (Michael) Mullins of Herrin and Stephanie Cline of Marion; four grandchildren, Chelsea Sheets, Jacob Mullins, Lucas Mullins, and Nicholas Mullins; two great-grandchildren, Madison Sheets and Lydia Sheets; special extended family, Karen and Scott Ewing; brothers and sisters, Sue Alexander, Kenneth (Sarah) Sheets, Connie (Rodney) Witthaus, Dale (Wanda) Sheets, Judy (Charles) Lawrence and Larry (Carmen) Sheets; numerous cousins, nieces, nephews, other relatives and friends. He was preceded in death by his parents; wife, Marie; and three brothers, Jack Sheets, Bobby Dean Sheets and Richard Sheets Funeral services for Tom Sheets will be held at Crain Funeral Home–Egyptian Chapel in Energy on Wednesday, May 12, 2021 at 11:00 a.m. with the eulogy given by Mike Gunter. Entombment will follow in Egyptian Memorial Gardens Mausoleum. Military Rites will be accorded by the Honor Guard Ritual Team comprised of the Carterville American Legion Post 347, the Herrin American Legion Post 645, and Herrin V.F.W. Post 1567 with assistance from the United States Army. A time of visitation will be held at the funeral home from 10:00 a.m. until the time of service. Memorial contributions may be made to Carmi Baptist Children’s Home, St. Francis Community Animal Rescue and Education, or St. Jude Children’s Research Hospital. Envelopes will be available and accepted at the funeral home. Crain Funeral Home–Egyptian Chapel has been entrusted with the arrangements.

Leo Thomas Sheets, age 79, of Herrin, passed away on Wednesday, May 5, 2021 at 4:29 p.m. in Memorial Hospital of Carbondale. Tom was born on December 28, 1941 in Fulton, Missouri, a son of Leo T. and Freda (Shelby) Sheets. He married Mildred... View Obituary & Service Information

The family of Leo Thomas Sheets created this Life Tributes page to make it easy to share your memories.

Leo Thomas Sheets, age 79, of Herrin, passed away on Wednesday,...

Send flowers to the Sheets family.