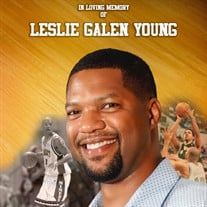 Leslie Galen Young, known by all as Galen, was born on October 16, 1975, in Memphis, Tennessee. He was baptized into the Catholic faith in December 1975 and developed a strong faith that guided his life. Galen's life ended tragically on June 5, 2021, after a vehicle violently crashed into his mother's home in Memphis where he was living at the time. Galen was raised in the Whitehaven area (Canada Gardens) of Memphis where he, his brother Elliott, and their friends established a love affair of athletic competition, eventually playing on every basketball court in the city. Their big sister, Tammy, was their number one fan, always believing in whatever Galen and Elliott wanted to do. Galen often spent summers and holidays in Cape Girardeau and St. Louis, Missouri, visiting his close-knit family whom he loved so much. Galen honed his basketball fundamentals at Bartlett High School and his focus shifted from multiple sports to the passion he had developed for basketball. He graduated from Hillcrest High School as a standout athlete on one of the best boys basketball teams in Memphis history with a record of 29-3. Galen was recruited to play basketball at Northwest Mississippi Community College. During his time at Northwest, 1994-1996, not only was he a student athlete and the team captain, Galen also developed friendships that he cherished throughout his life. Galen emerged as a rising star, playing alongside Elliott who was also recruited to Northwest. The Young brothers would lead the Rangers to a series of championships and eventually to a number six national ranking. Galen earned JUCO All-American honors his sophomore year. Galen's performance and legacy at Northwest earned him the honor of induction into the Northwest Community College Sports Hall of Fame in 2015, and the Mississippi Community College Sports Hall of Fame in 2018. Galen continued his athletic and academic career at the University of North Carolina Charlotte, 1997-1999. In 1999, Young was named Most Valuable Player of the Conference USA men's basketball tournament as the 49ers won the C-USA title. He was also a first-team All-Conference USA selection that year, leading a strong Charlotte team that won 23 games and made it to the second round of the NCAA tournament. Later in 1999, Young was a second-round draft pick of the Milwaukee Bucks (No. 48 overall). Although his professional career was outside of the NBA, for thirteen years Galen traveled the world playing a sport he loved. These adventures living and playing basketball in fifteen countries were some of his most treasured years and experiences. He credited these opportunities with expanding his view of the world and its possibilities, often sharing his stories and lessons learned. Following retirement from his playing career and the birth of his twin sons, Grayson and Ellis, Galen finished his Bachelor's degree in Criminal Justice at UNC Charlotte. With his degree in hand, Galen began the coaching career he dreamed of, starting in the Memphis public school system. In 2015, Galen began his first of five winning seasons as Associate Head Coach at Lane College at Jackson, Tennessee. He made great strides in developing the young men he coached, both on and off the court. In 2020, Galen moved to Kansas City, and served as Assistant Coach at Rockhurst University during a challenging season affected by the pandemic. At the time of his passing, Galen was excitedly preparing to start a new coaching job in Jackson, Mississippi, the following day at Jackson Preparatory School. Galen woke up every day with an enthusiastic spirit and determination to make the best life possible for his sons and to genuinely share his love and enthusiasm for life with everyone he held close. He was a proud and exemplary father who went to any length necessary to spend time raising his boys to ensure they would have a solid foundation of love and family. Galen often took his boys fishing, immersed them in family time, and made sure he was present for every moment possible. In his far too short 45 years, Galen Young strived to have a positive impact and to create a legacy of mentorship that would carry on for generations, and he succeeded. He led with kindness and encouragement, empowering others to reach their potential, as well. To know Galen was to love Galen. His creativity, care, and compassion fueled drawing, writing, a love of music, thoughtful gifts for loved ones, and a renowned sense of style. He will be remembered as a dedicated father, son, brother, friend, coach, and teacher. Galen was preceded in death by his grandparents, Lloyd and Annie Mae Williams, Leslie Sr. and Hallie Young; and two aunts, Laura Cato and Elsie Williams. Galen's legacy lives on through his beloved twin sons, Grayson and Ellis Young; mother, Gladys Young; father, Leslie Young Jr. (Dr. Faye DeClue-Young); sister, Tamera "Tammy" Young (Anthony Haley); brother, Elliott Young; stepsisters, Dr. Jennifer DeClue and Julia Allen; his dear love, Scarlett Harrod; nieces, Ellyncia Haywood, twins Addison and Allison Young, Miles Violet DeClue; nephews, Anthony Young, Bryan Young, Sullivan Young, and Austen Young; as well as uncles, aunts, cousins, and extended family. In addition, Galen's memory lives on through his friends, teammates, coaches, and players around the world. The wake will be held on Friday, June 11, at N.J. Ford and Sons Funeral Home, located at 12 South Parkway West, Memphis, TN 38109, from 6:30 PM until 8:30 PM. Following the wake, an outdoor vigil will be held at the Young home house located at 4598 Horn Lake Road, Memphis, TN 38109. Funeral services will be held on Saturday, June 12, at Oak Grove Missionary Baptist Church located at 7289 US-64, in Memphis, TN 38133, at 2:30 PM. A repast will follow the funeral service. Interment will be at St. Mary's Cemetery in Cape Girardeau, Missouri on Sunday, June 13, 2021 at 2:00 p.m. Funeral arrangements have been entrusted to N.J. Ford and Sons Funeral Home, Memphis, Tennessee and Crain Funeral Home, Cape Girardeau, Missouri.

Leslie Galen Young, known by all as Galen, was born on October 16, 1975, in Memphis, Tennessee. He was baptized into the Catholic faith in December 1975 and developed a strong faith that guided his life. Galen's life ended tragically on June... View Obituary & Service Information

The family of Leslie Galen Young created this Life Tributes page to make it easy to share your memories.

Leslie Galen Young, known by all as Galen, was born on October...

Send flowers to the Young family.