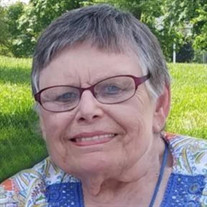 Linda Halterman Krueger, 77, of Nashville, Tennessee, passed away on March 30, 2021, after a short illness. Linda, born in Gary, Indiana, on July 25, 1943, married Glenn Lee Krueger in 1983, and made her home in Texas prior to his passing in 2000. She was the daughter of Austin O. Halterman and Hazel (Peeler) Halterman. Education, especially the transformative power of public schooling, was Linda’s passion. She was a proud graduate of Purdue University, where she earned a Bachelor’s degree in Secondary School Education in 1965. A true Boilermaker in heart and spirit, she enjoyed a good basketball game, brimming with joy with any victory over the rival team to the south. More than anything, Linda was a Mom who passed along to her son the importance of a great education and a love of the written word. Linda was a woman of strong Christian faith and courage. In the latter years of her life, while confronting a variety of medical challenges, she would share a smile and a laugh in even the most difficult of circumstances. She’ll be remembered as someone who bore her pain with the highest level of dignity and strength. A free spirit of the ‘60s era, Linda wasn’t much for being hemmed in and lived for the adventure of something new. To this end, Linda lived in 8 different states during her lifetime. Her favorite activity was road tripping to wherever the moment of wander would take her. While she never made it to Paris, France, she was able to venture to Paris, Tennessee, and Paris, Texas, and that was Just Fine with her. There’s no doubt that her journey home will be her best road trip ever. Both parents preceded her in death, as did her older brother, David A. Halterman. Also preceding Mrs. Krueger were her best friends, Nancy Gresham, Bettey Prout, and Ethel Quasny. Survivors include her son, Jeff (Courtney) Quasny, of Mount Juliet, Tennessee; her sister-in-law Kathryn Halterman, of Crown Point, Indiana; nieces Beth and Sarah Halterman; as well as numerous cousins. Mrs. Krueger’s family would like to extend a special thanks to the staff at Fifty Forward Nashville as well as Trevecca Healthcare & Rehab Center, where she resided for the past 3 ½ years. A Graveside Service will be held at Campground Cemetery on Friday, April 16 at 11a.m. with Pastor Mark Hasty officiating. Inurnment will follow. In lieu of flowers, the family asks that remembrances in Linda’s honor be made to Fifty Forward Nashville or a charity of one’s choice. Crain Funeral Home in Anna-Jonesboro is entrusted with arrangements.

Linda Halterman Krueger, 77, of Nashville, Tennessee, passed away on March 30, 2021, after a short illness. Linda, born in Gary, Indiana, on July 25, 1943, married Glenn Lee Krueger in 1983, and made her home in Texas prior to his passing... View Obituary & Service Information

The family of Linda Halterman Krueger created this Life Tributes page to make it easy to share your memories.

Send flowers to the Krueger family.