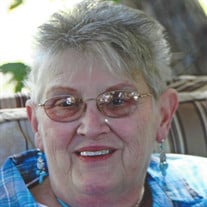 Linda Rae Wright, age 71, of Blairsville, passed away on at 5:40 PM on Thursday, June 17, 2021 at Herrin Hospital. She was born on December 25, 1949 in Herrin, Illinois to Ray and Loretta (Hampton) Wilson. She married Thomas Wright on March 19, 1966. Linda Rae worked in various nursing homes in the area as a caregiver as well as private in home care. She loved going shopping with her daughter and granddaughter, Lorinda and Lindy Jo. She also enjoyed taking care of her flowers and collecting snowmen. Most of all, Linda loved her family. Especially her children and grandchildren. Survivors include her Husband of 55 years, Tommy Wright of Blairsville; Daughter, Lorinda (Fred) Lacy of Blairsville, 2 Sons, Jeff Wright and James Wright both of Blairsville; Grandchildren, Jordan Lacy of Blairsville, Justin Lacy of Texas, Makinzi Wright of Georgia, Morgan (Keaton) Busby of Anna, Cameron (Brylee Oxford) Wright of Anna, Hailey Wright of Anna and Lindy Jo Wright of Carterville; 2 Brothers, Charles (Genevieve) Russell of Alabama and Rex (Suntha) Russell of California; 3 Nieces, Lilly Russell of California, Abigale Russell of Alabama and Debbie (Chuck) Hargrave of Trenton, IL; Nephew, Ryan Russell of California; Aunt, Nancy Ebersohl of Desoto; Many Special Cousins, Other Relatives and Friends. She was preceded in death by her Parents and her Brother, Terry Russell. Cremation will be accorded. The family will host graveside services at Hinchcliffe Cemetery in Cambria at a later date. Memorial contributions may be made to the American Cancer Society and will be accepted at the funeral home. The family would like to say a special thanks to the healthcare staff at Herrin Hospital for their excellent care over the last few weeks. Crain Funeral Home Egyptian Chapel in Energy has been entrusted with the arrangements.

Linda Rae Wright, age 71, of Blairsville, passed away on at 5:40 PM on Thursday, June 17, 2021 at Herrin Hospital. She was born on December 25, 1949 in Herrin, Illinois to Ray and Loretta (Hampton) Wilson. She married Thomas Wright on March... View Obituary & Service Information

The family of Linda Rae Wright created this Life Tributes page to make it easy to share your memories.

Send flowers to the Wright family.