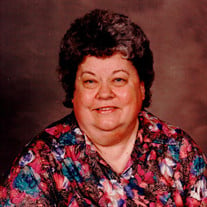 Margaret H. Shelton, age 87, of Anna, passed away on Monday, July 5, 2021 at 4:57 p.m. at Memorial Hospital of Carbondale in Carbondale, Illinois. Margaret was born on October 30, 1933, in Trigg County, Kentucky to William Wendell and Ruth (Reynolds) Hillman. She married John B. Shelton, Jr. on August 22, 1954, and he preceded her in death on November 8, 2016, after 62 years of marriage. Margaret was a 1951 graduate of Trigg County High School. During her high school years she was a drum majorette, football queen attendant, class cheerleader, sales manager, class program chairman, and a member of the Girls Glee Club and Future Homemakers of America. It was during a school event that she met the love of her life, John. After graduating high school, Margaret worked as a secretary for the Trigg County School system in Cadiz. After she and John married, she was a dedicated homemaker, kept an immaculate home, was an excellent seamstress, and a phenomenal cook. John and Margaret grew a huge garden together and they canned and froze produce. Margaret was a den mother of her son’s Cub Scout den during the 1970’s. From 1980 until 1990, Margaret, along with her husband and daughter, Deborah, was the primary caregiver for her handicapped granddaughter, Jackie Bauer. Mrs. Shelton was an active member of the Anna Church of Christ where her husband served as minister until he retired in 2000. Throughout her years there, she kept attendance records for the church, taught Bible School classes, and oversaw refreshments for Vacation Bible School. For the past 26 years, Margaret has mailed correspondence and bulletins to those who were unable to attend services. She was known for her care and concern, often including hand-written, personal notes with her church mailings. One of the greatest joys in Margaret’s life was spending time with her children and grandchildren, who lovingly referred to her as MeMa. Survivors include her four children, Mark (Diana) Shelton of Anna, Deborah Yates of Vienna, Rachel (Bruce) Paschall of Florissant, Missouri and Jeffrey Shelton of Normal; six grandchildren, Stacy (Tim) Shelton-Hubbs of Anna, Alyssa (Tim) Shelton-McGrath of Anna, Benjamin (Paige) Yates of Vienna, Jordan Shelton of Washington, Jillian Shelton of Washington and Jackson Shelton of Texas; five great-grandchildren, Logan Crunk, Ian Crunk, Cayden Sawyer, Coby Sawyer and McCormick Yates; one great-grandchild due in December; one great-great-grandchild due in August; her sister, Clara (Charles) Wade of Frankfort, Kentucky; her sister-in-law, Mildred Demers of Michigan; and numerous nieces, nephews, cousins, other relatives and friends. She was preceded in death by her parents; husband, John B. Shelton, Jr.; stillborn twin daughters, Joan and Jill Shelton; granddaughter, Jacklyn Renee Bauer; a great-great-granddaughter, Drue Brianne Foster; three brothers, Dan (Kathryn) Hillman, Billy Hillman and Fred Hillman; and one sister, Ann (Jack) Karnes. Visitation will be held at Crain Funeral Home in Anna on Sunday, July 11, 2021 from 4:00 p.m. until 8:00 p.m. and again on Monday, July 12, 2021 from 9:00 a.m. until the time of service. Funeral services will be held at Crain Funeral Home in Anna on Monday, July 12, 2021 at 11:00 a.m. with R.W. McAlister officiating. Interment will follow in Anna City Cemetery. Memorial donations may be made to the Anna Church of Christ or the American Diabetes Association and will be accepted at the funeral home. Arrangements have been entrusted to Crain Funeral Home, Anna-Jonesboro.

Margaret H. Shelton, age 87, of Anna, passed away on Monday, July 5, 2021 at 4:57 p.m. at Memorial Hospital of Carbondale in Carbondale, Illinois. Margaret was born on October 30, 1933, in Trigg County, Kentucky to William Wendell and Ruth... View Obituary & Service Information

The family of Margaret H. Shelton created this Life Tributes page to make it easy to share your memories.

Send flowers to the Shelton family.