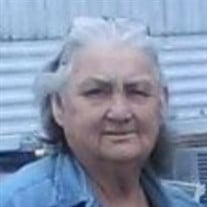 Margie Palmer, age 77, of McClure, formerly of Doniphan, Missouri passed away at 6:28 pm on Tuesday, August 10, 2021 at her daughter’s home. She was born on December 12, 1943 in Doniphan, Oregon County, Missouri to Orb and Irene (Harvill) Johnson. Margie was baptized in 1953 at Jolie, Missouri. She enjoyed quilting, upholstering and working puzzles. She drove a semi over the road for several years. On March 2, 2004 she married Junior Palmer. She had been previously married to Marcus Reece. She was married to Charles Hilton for several years. She had also been married to Delbert Robinson. She is survived by daughter, Sharon (Greg) Reeves of Crossville, Indiana, daughter, Sheila (Randy) Prater of McClure, son, Dayrl Reece of McClure, daughter, Tammy Hilton (Darrell) Hale of McClure, brother, Billy Johnson of Brunswick, Georgia and a very special friend, Cindy Hitt of Doniphan, Missouri. She was preceded in death by her parents, grandparents, sister, brother, great grandson and husband, Junior Palmer. Graveside services will be held on Friday, August 13, 2021 at 2:00 PM at Rose Hill Cemetery in Thebes, Illinois with Pastor Randy Morgan officiating. Interment will follow. Memorials may be made to Missouri Dialysis Center in Cape Girardeau and will be accepted at the cemetery. Crain Funeral Home & Cremation Service in Cape Girardeau is in charge of the arrangements.

The family of Margie Palmer created this Life Tributes page to make it easy to share your memories.

Send flowers to the Palmer family.