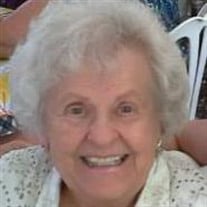 Martha “Marge” (Krause) Hendricks, 96, of Murphysboro, Illinois passed away on Monday, December 22, 2020, at the Landings in Carbondale, IL. Marge was born at home in Cicero, Illinois, on September 24, 1924, the youngest daughter of nine sisters born to Lithuanian immigrants Michael and Gertrude (Staniulis) Krause. She married Earl S. Hendricks, Jr., on April 10, 1944 at St. Mary’s Cathedral in San Francisco, CA. He preceded her in death in 2000. Growing up in Cicero she was known as a tomboy, playing baseball for the Zips, climbing trees, swimming for Morton East High School swim team, and daredevil roller skating. In her later years, she loved playing bridge and traveling, making a trip to Lithuania in the late ‘90s to explore her family roots. She was always up for an adventure. Marge worked for many years at SIUC, eventually retiring as the Administrative Aide to the Dean of the Graduate School. A strong believer in education, she received her BS in Business Education from SIUC while raising her family and working. She loved being a Saluki. Marge loved her children and grandchildren. Unfortunately, she did not get to form that bond with her great-grandchildren due to dementia, but she would have loved them deeply. She is survived by her children: Earl W. (Patty Ann Leopold), Michael “Mick” (Chardale Carroll), Patti White (Gregory), Lorna Battles, Scott (Cindy Hagan), and Kevin (Weihong Zhao). She is also survived by her grandchildren: Heather Madden (Joe), Andrea Harper (Chris), Ami Grimes (Tony), Jaime Hendricks (James Marks), Adam Hendricks, James Hendricks, Erin Scimone (Adam), Eric White (Emily Jane Davis), Tyler Battles (Alyssa Berg), Jade Battles (Alex Holmes), Katherine Moake (Brandon), Natalie Hendricks, Matthew Hendricks, and Jessica Hendricks. Also, four great grandchildren: Hayden Marks, Roman Scimone, Huxley Holmes, and Norah Jane Harper; Her sister-in-law, Mary Jordan; Special family friends Barbara and Jerry Willett and Verna and Bryan Ferguson; and many nieces and nephews. In addition to her husband, Earl, Marge was predeceased by her son Jim in 1986, her parents, her eight sisters, her in-laws and many special friends who touched her life over the years. At the present time, due to COVID restrictions, only graveside services will be held on Monday, December 28, 2020 at 2:30 p.m. in Pleasant Grove Memorial Park, Murphysboro. A memorial service will be planned for later in 2021. Marge’s family wants to express deep appreciation to the staff at the Landings who became Marge’s family over the last three years that she resided there. Several had been with her from day one, specifically Rendy and Sherry. We also want to thank Hospice of Southern Illinois for the care they gave Marge over the past year, especially her last week. In lieu of flowers, the family requests that memorials in Marge’s name be made to one of the following organizations: Hospice of Southern Illinois (204 Halfway Rd, Marion, IL 62959); St. Francis CARE (6228 Country Club Rd, Murphysboro, IL 62966); St. Andrew’s School (723 Mulberry St, Murphysboro, IL 62966) ;The Murphysboro Food Pantry (906 N. 14th St, Murphysboro, IL 62966) or a charity of your choice.

The family of Martha "Marge" Hendricks created this Life Tributes page to make it easy to share your memories.

Send flowers to the Hendricks family.