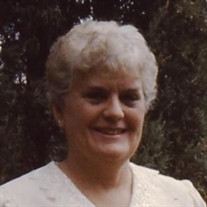 Mary Margaret Caughron, went to be with her Lord, Tuesday, July 14, 2020 at Barclay Friends in West Chester, Pennsylvania. She was 89 years old. Barclay Friends has been her residence since 2016. Mary was born on January 27, 1931 in Cairo, Illinois and was the youngest of three daughters born to Leonard and Harriet (Brankel) Levitt. She attended school and spent her formative years in Cairo. Mary worked during her teenage years at a drug store soda fountain and as a telephone operator. Mary and Fay H. Caughron were married on January 28, 1950 at St. Joseph's Rectory in Cairo, Illinois and spent 52 years together until Fay’s death March 31, 2004. She was a lifelong Catholic and attended Mass at St. Mary Magdalen Church in Brentwood, Missouri. Mary was a lifetime member of the Girl Scouts of America and volunteered for many years as a Leader for her daughters' troops. She also volunteered at her children’s school in the library and for the Red Cross Gray Lady program in the school clinic. Mary enjoyed gardening, traveling, spending time with her family especially her grandchildren and was an avid reader. Mary worked for JC Penney when the family lived in Melbourne, Florida. After their move to St. Louis in 1973, Mary worked for Community Federal Savings and Loan. She is survived by her three children, Robert (Karen) Caughron, Catherine (David) Schupp and Carol Caughron (Robert Douglas). She is also survived by her six grandchildren; Audrey Schupp (Jaymie Dewitt), Stephanie (Lisa) Beane, Seth (Toyoko Orimoto) Caughron, Adam Caughron, Rebecca (Raymond) Chalme, Kristen (Dave) Holcomb; and two great grandchildren, Noah and Hana Caughron Orimoto. She is also survived by numerous nieces and nephews. Mary was preceded in death by her parents, Leonard and Harriet Levitt, her husband, Fay Hillman Caughron, and her two sisters, Helen Hill and Harriet Thompson. Cremation has been accorded in Pennsylvania. A prayer service will be held at 10:00 AM on Saturday, August 7, 2021 at Saint Patrick Catholic Church in Cairo, Illinois with Mary Helen Wissinger officiating. Inurnment will follow in Beechwood Cemetery in Mounds, Illinois. In lieu of flowers, donations in her memory may be made to Barclay Friends, 700 N Franklin Street, West Chester, Pennsylvania 19380. Crain Funeral Home is Cairo is in charge of local arrangements.

Mary Margaret Caughron, went to be with her Lord, Tuesday, July 14, 2020 at Barclay Friends in West Chester, Pennsylvania. She was 89 years old. Barclay Friends has been her residence since 2016. Mary was born on January 27, 1931 in Cairo,... View Obituary & Service Information

The family of Mary Margaret Caughron created this Life Tributes page to make it easy to share your memories.

Mary Margaret Caughron, went to be with her Lord, Tuesday, July...

Send flowers to the Caughron family.