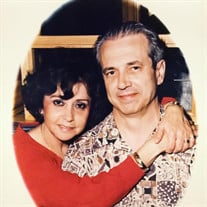 Mary Kratky (Mother, Grandmother, Great Grandmother, Wife, Mentor, and Teacher), of Cape Girardeau passed away at the age of 83 years old at 12:36 a.m. on September 23, 2020, at the Chaffee Nursing Center. She was born in San Jose, CA on June 29, 1937 to Jesus and Pablo Becerra, the youngest of nine children. As she raised her own family, Mary’s feisty personality helped her to instill perseverance in her children with “get tough” pep talks. She enjoyed cooking and especially making her famous “McMary” breakfast sandwiches - regardless which day of the week it was. She was also like an Encyclopedia for the rest of the family when it came to special dates, weddings, birthdates, anniversaries, and other milestones. In her spare time, she would curl up with one of her favorite romance novels. Later in life, she earned a Childhood Development Accreditation and became a special education teacher in both Arkansas and California. Furthermore, she used her bilingual abilities to visit Spanish speaking families in Northwest Arkansas. Her advice was widespread when it came to educating children and their parents. Like one of her romance novels, she joined her husband, Don, on the exact day of what would have been their 59th wedding anniversary. She is survived by her daughter, Jacqueline (Kevin) Hammond of Jackson, MO, son, Paul (Patty) Kratky of Irvine, CA; grandchildren, Rochelle, Timothy, Mariel, Vincent and Daniel; great grandchildren, Thomas, Cecilia, and Lilliana and a sister, Eleanor Moralez, nieces, nephews, and other relatives. She was preceded in death by her parents, husband, brothers, Angelo, Joe, Sal, Pete, and Paul Becerra, and sisters, Francis Hernandez and Ruth Hernandez. Cremation rites have been accorded. Crain Funeral Home and Cremation Services is in charge of arrangements.

Mary Kratky (Mother, Grandmother, Great Grandmother, Wife, Mentor, and Teacher), of Cape Girardeau passed away at the age of 83 years old at 12:36 a.m. on September 23, 2020, at the Chaffee Nursing Center. She was born in San Jose, CA on June... View Obituary & Service Information

The family of Mary Kratky created this Life Tributes page to make it easy to share your memories.

Send flowers to the Kratky family.