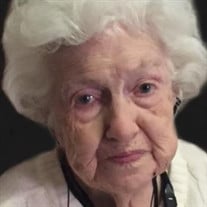 Mary Shafer, age 100, of Thebes, Illinois, passed away on Tuesday, May 11, 2021 at 1:40 a.m. in Ratliff Care Center in Cape Girardeau, Missouri. Mary was born on March 14, 1921 in East St. Louis, Illinois, a daughter of Walter Lee and Mattie (Pullem) Minton. She was the second of seven children born to their union. She married Edward Shafer on July 25, 1942 in Cape Girardeau and he preceded her in death on October 30, 1966. As a child of the Great Depression, Mary was no stranger to hard work. She left home at 15 to take a job on a dairy farm where she cared for the house, twin year- old boys, and cooked 3 meals a day for the family and crew of 12 men. Half her wages were sent home to help support her family. This is where she learned her life’s principal of use it up, wear it out, do without and make do. Mary worked a combined total of 33 years as a cafeteria cook, first at the Thebes School, and later, when the local schools consolidated, at Egyptian Community Unit School, where she retired as cafeteria supervisor in 1989. Mary took pride in and was noted for her cooking, especially pies, cinnamon rolls and yeast rolls. Former students still remember school lunches that included hot rolls made by her. In retirement, Mary took pleasure in sewing and attending Beech Grove Baptist Church in Thebes, where she was children‘s Sunday School teacher for several years. She also volunteered as church custodian. Even into retirement, Mary enjoyed cooking for others. You never left her home without being fed. She was preceded in death by her husband, Ed; parents; half-sister, Viola Underwood; infant sister, Helen; and brothers, Hollis Minton and Robert Minton. Also, niece, Mary Ellen Fugate; and nephews, Thomas Smothers and Ronald Payne. Loving survivors are her children, Edward E. Shafer and wife, Sharon, of Cape Girardeau, MO; Elizabeth McCoy and husband, Lyle, of Thebes, IL; grandchildren, Kathi Gosche (Bryan) of St. Charles, MO, Jason Shafer (Marie) of Jefferson City, MO, and Paula Shafer of Cincinnatti, OH; and great-grandchildren, Kayle Gosche and Eileen Shafer. She is also survived by her siblings, Thelma Smothers of Jackson, MO, Ruth Rosenthal of Olive Branch, IL and James Minton (Shirley) of Cape Girardeau, MO. Visitation for Mary Shafer will be held at Crain Funeral Home in Tamms, Illinois on Monday, May 17, 2021 from 11:00 a.m. until 1:00 p.m. Funeral services will be held at the funeral home on Monday, May 17, 2021 at 1:00 p.m. with Reverend Lacie Betts officiating. Interment will follow in Rose Hill Cemetery in Thebes. In lieu of customary remembrances, the family requests memorial donations be made to the American Heart Association or St. Jude Children’s Research Hospital. Envelopes will be available and accepted at the funeral home. Crain Funeral Home in Tamms has been entrusted with the arrangements.

The family of Mary Shafer created this Life Tributes page to make it easy to share your memories.

Send flowers to the Shafer family.