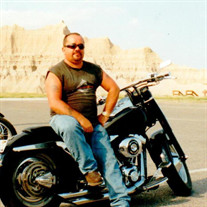 Michael E. “Fatboy” Campbell, age 56, of rural Cairo (Frog City), passed away on Sunday, January 30, 2022 at Southeast Hospital. He was born on October 9, 1965 to Eugene and Mozelle (Wallace) Campbell in Cairo. After graduating from Cairo High School, Michael joined the United States Marines, and served his country for four years. Throughout his tours of duty, he visited the countries of Thailand, Singapore, Hong Kong, Philippines, and Australia. He worked as a riverboat captain for ACBL and Hines Furlong Line out of the Operator’s Union IUOE Local 318. Michael was an avid motorcycle rider, and loved hunting and fishing. He never met a stranger and everyone who ever met him could tell a story about him. He served as the president of the Alexander-Pulaski Sportsman Club and was a member of the Cairo Masonic Lodge. He loved his grandbabies and his many friends at the local watering holes Survivors include his son, Michael (Amanda) Campbell II and Nicholas Campbell; grandchildren, Kacie and Michael III; significant other, Belinda Sullivan; sisters, Linda (Bob “Mack”) Gibson, Connie (Terry) Greer, and Debbie Thomas; and several nieces, nephews, other relatives, and friends. He was preceded in death by his parents; sister, Sue (Darrell) Shemwell; and brother-in-law, Brad Thomas. The family will hold a celebration of life on Saturday, February 5, 2022 at 6:00 pm at the Alexander-Pulaski County Sportsman’s Club with Masonic rites. A graveside service will take place on Monday, February 7, 2022 at 11:00 am at the Mound City National Cemetery with military honors. In lieu of flowers, the family requests with gratitude that memorial contributions be made to the Alexander-Pulaski County Sportsman’s Club. To view the obituary or to leave an online condolence for the family visit www.crainsonline.com.

The family of Michael E. "FatBoy" Campbell created this Life Tributes page to make it easy to share your memories.

Send flowers to the Campbell family.