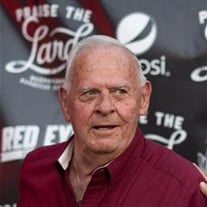 James Michael (Mike) Mills, 79, of Murphysboro, passed away Tuesday, December 29, after a brief non-COVID related illness. Mills was born on July 15, 1941 in Cape Girardeau, Missouri. He was the fourth of five children born to Faye and Leon Mills. His siblings are Landess Mills, Robert Mills (d. 2003), Jeanette Hudgins (d. 2012), and Mary Pat Mills. He was a 1959 graduate of Murphysboro Township High School where he made treasured life-long friends including Jean and Jim Tweedy, Sue and Richard Adams, and Frances and Eddie Fisher, among many others. He was a member of the 1958 Hall of Fame football team and was named a Distinguished Alumni in 2014. Mills married high school sweetheart Barbara Maclin (d. 2009) in 1963. They divorced in 1971. He was married to Susie Clutts Mills from 1973 until 2001. A graduate of the first class of Dental Technology at Southern Illinois University, he moved to Elgin, IL to further his training in prosthodontics and then returned to Murphysboro to found Murphysboro Dental Lab, supplying crowns and dental prosthetics to dentists all over the Southern Illinois region. That business, one of the oldest in Murphysboro, continued to operate until October 2019. Always civic minded, he was an active member of the Elks and Shriners, among a number of other community organizations. In 1988, Mills founded, along with two friends, Rob Williams and Pat Burke, the Praise the Lard Murphysboro Barbecue Cook-off, which, over 33 years, has become a crown jewel on the barbecue circuit, drawing thousands of people to Murphysboro each year. His hope was that it would help drive commerce and economic development in Murphysboro. Welcoming teams and judges from all over the world each September was the highlight of his year. In 1985, he became the fourth owner of a tavern called Al & Ray’s, initially Ellis Tavern, a bar where, for the past 100 years, you could buy a barbecue or a hamburger. He renamed it 17th Street, and began building his version of the church of barbecue and what became, over time, a legendary shrine to which people flocked from all over the world. While he barbecued his entire life, he earned the moniker “The Legend” In the early 1990s, when he was co-captain of the Apple City Barbecue team, one of the most celebrated teams ever on the circuit. He was a four-time World Champion and three-time Grand World Champion at Memphis in May, otherwise known as the Super Bowl of Swine. He was also the 1992 Grand Champion of the Jack Daniel’s World Invitational Barbecue Cooking Contest and he won the Jack Daniel’s Sauce Contest that year as well. Restaurants & Institutions called him the “most-revered barbecue restaurateur in America,” and the restaurant is continually lauded and included on top 10 lists of barbecue in America. Mike was the barbecue guru at and a partner in Blue Smoke restaurant in New York City and a founding partner in Memphis Championship Barbecue in Las Vegas. Along with his daughter, he’s the co-author of two books, Peace, Love, and Barbecue, nominated for a 2006 James Beard Foundation award and winner of the 2006 National Barbecue Association Award of Excellence, and Praise the Lard: Recipes and Revelations from a Legendary Life in Barbecue. In October 2008 he was honored with the Pioneer of Barbecue award at the Jack Daniel’s World Invitational Barbecue Cooking Contest. Mills was inducted into the Barbecue Hall of Fame in 2010. He’s the only barbecuer with top-security clearance to board Air Force One, where he delivered barbecue to President Bill Clinton, and the only pitmaster in America who’s been featured in Vogue magazine four times. Aspiring and seasoned barbecue restaurateurs from 45 states and 16 countries have attended the Mills family’s OnCue Hospitality classes and he has helped incubate dozens of barbecue restaurants across the globe. Mills constantly preached that there are two types of people in this world – givers and takers – and he epitomized giving. Generosity was his recipe for success. He was proud of the awards and accolades, but his deepest passion was helping others achieve their barbecue dreams. “How can I help?” was his constant refrain. While his barbecue career has taken him all over the country, Mike’s heart remained solidly in Murphysboro, where he was committed to shining a spotlight on Southern Illinois, drawing millions of people to his restaurants, and in turn, to other attractions in the area. Equally passionate about his family, Mills was legendary for his rigid work ethic, and his children, grandchildren, nieces, and nephews were all compulsory students of the Mike Mills School of Labor. Sleeping in meant rising at 6:00 am, and if the task assigned didn't result in sore muscles, sweat, and exhaustion, it was clearly not done properly. Dreaded were the words “I’ve got a job for you,” but all who worked under his supervision are grateful for what was in hindsight an invaluable experience. Mills is survived by his children, Amy Jane Mills and Christopher Mills, grandchildren Guy W. (Woody) Tunnicliffe, III and Faye Landess Tunnicliffe, siblings Landess Mills and Mary Pat Mills, his brother-in-law John Hudgins, and much-loved nieces and nephews: Melody Mills Corso, Gary Landess Mills (Brenda), Michael Mills (Nina), Rob Mills (Karen), Steve Mills (Tracey), Joe Hudgins (Lane), Jem Hudgins (Flo), Molly Hudgins (Tracey), and Chris Mills (Laurel) along with many great-nieces and nephews. He was predeceased by his brother Robert (June 11, 2003) and sister Jeanette (October 1, 2012). In lieu of flowers, the family requests with gratitude that memorials honoring Mike Mills should be made payable to Murphysboro Main Street and sent to Lisa Blake, PO Box 382, Murphysboro, IL 62966. Services will be held Monday, June 28, 2021, at the United Methodist Church, 1500 Pine Street, Murphysboro, Illinois. The family will receive visitors from 11:00 a.m. – 12:00 p.m., followed by a memorial service at 12:00 p.m.

James Michael (Mike) Mills, 79, of Murphysboro, passed away Tuesday, December 29, after a brief non-COVID related illness. Mills was born on July 15, 1941 in Cape Girardeau, Missouri. He was the fourth of five children born to Faye and Leon... View Obituary & Service Information

The family of Mike Mills created this Life Tributes page to make it easy to share your memories.

Send flowers to the Mills family.