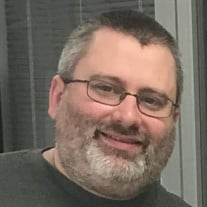 Mike “Sully” Sullivan, age 41, of Cape Girardeau, died suddenly on Sunday, Oct. 24, 2021. He was born on October 9, 1980 to Clifford and Shirley (Faulkner) Sullivan in Cape Girardeau. Mike was long-time employee of Drury Hotels as a data assistant. He had worked for Drury since completing his bachelor’s degree at SEMO University. He loved sports, and his favorite teams were the Minnesota Vikings and St. Louis Cardinals. Mike enjoyed participating in band and boy scouts until baseball took over. During high school, he played for Cape Central baseball team, and later went on the play for the Cape Legion Baseball Team, church basketball leagues, and several other travel baseball teams. Survivors include his mother, Shirley Sullivan; a sister, Robbie Ralph; his life partner, Leigh Ann; two step-sons, Justin (Trinity) Day and Lane Golemon; two half-sisters, Sandy Sullivan and Deanna Sullivan; his father-in-law, Marlin Pender; several nieces, nephews, loving cousins, aunts, uncles, and other relatives. He was preceded in death by his father, Cliff Sullivan; two half brothers, Larry and Kenny; and his mother-in-law, Tonya Pender. Visitation will be on Saturday, October 30, 2021 from 11:00 am to 1:00 p.m. at Crain Funeral Home in Cape Girardeau. Funeral service will follow at 1pm at the funeral home with his uncle, Bro. Terry Faulkner officiating. Everyone is asked to wear their favorite sports team apparel (except Cubs). Interment will take place following the service at Cape County Memorial Park. There will be a meal for family and friends following the burial at 3:00 p.m. at the First Presbyterian Church located at 235 Broadway Cape Girardeau. In lieu of customary remembrances, the family requests with gratitude that memorial contributions may be made to the Humane Society or Safe Harbor Animal Sanctuary.

The family of Mike "Sully" Sullivan created this Life Tributes page to make it easy to share your memories.

Send flowers to the Sullivan family.