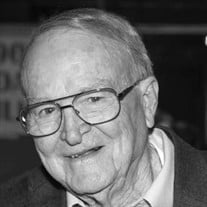 Former Carbondale Mayor Neil Dillard died in Carbondale Memorial Hospital on April 24 at the age of 92. The depth, breadth and length of Neil&#8217;s service to Carbondale and his native Southern Illinois will be celebrated with a public gathering... View Obituary & Service Information

The family of Neil L Dillard created this Life Tributes page to make it easy to share your memories.

Send flowers to the Dillard family.