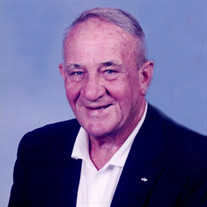 Orvil Followell, age 93, of Murphysboro, passed away on March 31, 2022 at 6:30 a.m. at his home. Orvil was born on June 22, 1928 in Jackson County, Illinois, the son of Louis and Lucy (Wayland) Followell. He married Juanita R. Harral on March 11, 1949 in Piggott, Arkansas and she preceded him in death on December 29, 2015. Orvil first joined the United States Navy until he was sent home for being too young. After returning home he worked on the railroad and then joined the United States Army serving during World War II. Orvil worked for Illinois Electric and Utility Company which later became CIPS (Ameren) until his retirement. He was a member of the Murphysboro Masonic Lodge #498 and the Murphysboro Shrine Club, Scottish Rite of Belleville, Valley of Southern Illinois and Ainad Temple of East St. Louis. He was a member of the American Legion Post #127 in Murphysboro and a member of Berean Christian Church. Survivors include his sons, Michael (Janet) Followell of Port Charlotte, Florida and Dennis (Tina) Followell of Murphysboro; four grandchildren, Nathan (Rebekka) Followell, Ryan (Joanna) Followell, Katie (Charley) Robertson and Kevin (Becky) Followell; nine great-grandchildren, Natalie and Allison Followell, Adalynn, Cohen, Bennett and Declan Followell, and Carlee, Cylas and Colin Robertson; three sisters-in-law, Wilma Butler, Betty Vaughn, and Sharon Corzine; and numerous nieces, nephews and other relatives. He was preceded in death by his parents; his wife of sixty-eight years, Juanita Followell; two sisters and brothers-in-law, Esther (Clifford) Clover and Nancy (Elmer) Hill; and two sisters-in-law, Wanda and Joann. Visitation will be held at Crain Funeral Home, 1421 Walnut Street, Murphysboro, Illinois on Monday, April 4, 2022 from 10:00 a.m. until 10:45 a.m. Masonic rites will be rendered at the funeral home by the Murphysboro Masonic Lodge #498 at 10:45 a.m. Funeral services will be held at Crain Funeral Home on Monday at 11:00 a.m. with Pastor Jason Frederick officiating. Interment will follow in Murdale Gardens of Memory with military rites by American Legion Post #127 and the United States Army. In lieu of customary remembrances, the family requests with gratitude that memorial contributions be made to Hospice of Southern Illinois. Envelopes will be available and accepted at the funeral home. Crain Funeral Home of Murphysboro has been entrusted with the arrangements.

Orvil Followell, age 93, of Murphysboro, passed away on March 31, 2022 at 6:30 a.m. at his home. Orvil was born on June 22, 1928 in Jackson County, Illinois, the son of Louis and Lucy (Wayland) Followell. He married Juanita R. Harral on March... View Obituary & Service Information

The family of Orvil Followell created this Life Tributes page to make it easy to share your memories.

Orvil Followell, age 93, of Murphysboro, passed away on March...

Send flowers to the Followell family.