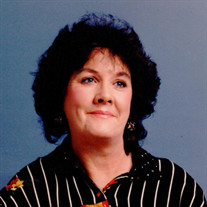 Patricia Ann Bingaman, 75, of Vienna passed away on Monday, January 18, 2021, at Metropolis Rehab and Health Care Center. She was born in Cairo, Illinois on August 22, 1945, to Charles and Rossie (Hodges) Bingaman. Patricia was CNA for many years. She also had worked at Snowers Factory in Mounds and Burkharts Factory in Cairo. Some of her favorite things to do were sewing, quilting, painting and watching HGTV. Patricia’s family was very important to her and she adored them all. While raised in the Methodist Church in Ullin, she later became a member of the Assembly of God in Cairo. Her Christian faith was important to her and she would give anyone the shirt off her back if they were in need. She is survived by her son, Jimmy (Rose) Roper of Grand Chain; daughter, Amy Roper of St. Genevieve, MO; grandchildren, Savanna Roper (fiancé Billy Thomas), Sabrina Roper, Ira Elliot, Jesse Roper, Rebecca Roper, Bo Altenberger; sisters, Sonja (Michael) Gambill of Anna, Karla (Kenny) Reichert of Karnak; brother, Malcolm (Annette) Bingaman of Grand Chain; nephews, Korey (Stacy) Reichert of Karnak, Kody Reichert (Amanda) of Metropolis, and Lucas (Lindsey) Bingaman of Cape Girardeau; nieces, Cassandra (Eric) Watkins and Rachael Ann Cobb, both of Anna, and Taylor (Brett) Smith of Cape Girardeeau; many other relatives and friends. She was preceded in death by her parents. Visitation will be held from 1:00 PM to 3:00 PM, Friday, January 22, 2021 at Crain Funeral Home in Ullin. Funeral services will be at 3:00 PM at the funeral home with Rev. Dr. David Estep officiating. Cremation will follow. Private inurnment will take place at a later date at Green Lawn Memorial Gardens. Memorial contributions may be made to P.A.W.S. of Anna and will be accepted at the funeral home.

Patricia Ann Bingaman, 75, of Vienna passed away on Monday, January 18, 2021, at Metropolis Rehab and Health Care Center. She was born in Cairo, Illinois on August 22, 1945, to Charles and Rossie (Hodges) Bingaman. Patricia was CNA for many... View Obituary & Service Information

The family of Patricia Ann Bingaman created this Life Tributes page to make it easy to share your memories.

Patricia Ann Bingaman, 75, of Vienna passed away on Monday, January...

Send flowers to the Bingaman family.