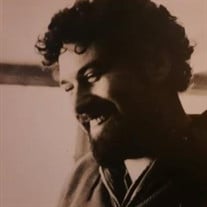 On Tuesday, December 8, 2020, Paul Eugene Berube, 79, passed away peacefully from Covid complications. Paul was born on October 7, 1941 in Cambridge, Massachusetts to Annette and Gene Berube. In 1973, Paul married the love of his life, Jill Eckhouse. Paul devoted much of his life to helping others and volunteered with the VISTA Americorps Program at the Cheyenne Reservation in Lame Deer, Montana from 1965 - 1966. He received his medical degree from the University of Health Sciences, Chicago Medical School in 1983, and he was a beloved OB/GYN at Rural Health in Anna, Illinois for 21 years. Paul’s family frequently met his former patients who would share glowing stories about his caring manner. Paul had a memorable sense of humor characterized by absurdity and deadpan delivery. He also excelled at “dad jokes.” If you happened to say, “I’m hungry,” he always replied, “I’m Paul, nice to meet you!” Paul loved old cars and could often be found in his armchair on Saturday mornings, listening to Car Talk on NPR, and laughing loudly. Paul also had a tender heart and couldn’t finish watching favorite films, such as It's a Wonderful Life and When Harry met Sally, without shedding tears. Paul is preceded in death by his parents and his sister, Colette. He is survived by his wife, Jill; his two children, Daniel and Aleza; his son-in-law, Justin Sitarz; his grandchildren, Feivel and Shoshana; and his sister, Denise Cody. In lieu of flowers, Paul and his family would appreciate donations to the American Indian College Fund to support his passion for serving the American Indian community: https://www.collegefundlegacy.org/?_ga=2.44198241.416799096.1607476373-81703300.1607476373 Cremation rites have been accorded. Crain Pleasant Grove-Murdale Funeral Home is in charge of arrangements.

On Tuesday, December 8, 2020, Paul Eugene Berube, 79, passed away peacefully from Covid complications. Paul was born on October 7, 1941 in Cambridge, Massachusetts to Annette and Gene Berube. In 1973, Paul married the love of his life, Jill... View Obituary & Service Information

The family of Dr. Paul E Berube created this Life Tributes page to make it easy to share your memories.

Send flowers to the Berube family.