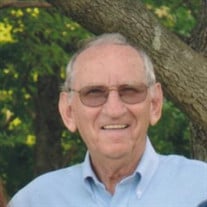 On January 11, 2022, Philip Dee McGee left his earthly home to join his wife in his Heavenly home with family all around at Memorial Hospital of Carbondale. He was born on May 21, 1935 in Grassy Township in Williamson County, Illinois to Lois Orsen and Beulah Belle (Weiss) McGee. He married Jeanette (Crawshaw) McGee on September 25, 1954 in Union Hill Christian Church. Philip was a hardworking man who took great pride in doing whatever job was before him with a high level of excellence. After working at the glove factory for several years, he decided to start his own business, McGee Metal Works, with his wife in 1962. He learned how to weld iron and to form exquisite ornate railings and staircases. His venture was a great success and he became well known for his craft; in fact, his handiwork can still be found in buildings across this area. His skill was not limited to working with iron; with minimal help, he designed and built his own dream home. And over the years, he added to it: a garage, garden and gazebo. He was very skilled with his hands and there was not a lazy bone in his body. He kept his lawn and home in immaculate condition up until the day he died. Throughout his life, he loved to travel. He frequently took his wife and children on road trips across the United States and even to Canada and Mexico. After becoming a grandfather, he explored other states and famous landmarks with his grandchildren. Philip and Jeanette treasured their families and would often go to visit their children, grandchildren, brothers, sisters and cousins. Even in their later years, they loved to go for long drives, sometimes just to get a meal or have ice cream. He also loved spending time with his brothers, going for drives, looking at tractors and eating together. Philip was preceded in death by his wife; parents; sisters-in-law: Margaret McGee, Mae McGee, Louise Doetch, Betty Hiller, Virginia Chamness, Doris Dover and Jo Ann Cargine; and brothers-in-law: Gerald Forby, Bobby Crawshaw, Willie Doetch, Hugh Hiller, Delbert Chamness, Ralph Dover and John Cargine. He is survived by his children: Steve McGee, Donna (Tim) Irons, Glenn (Julie) McGee and Kent (Stacey) McGee; grandchildren: April Wang, Benjamin Irons, Samuel Irons, Joseph Irons, Caleb McGee, Nathan (Lacey) McGee, Scott (Emily) McGee, William (Takisha) Spradlin, Kelsee Phelps and Katlyn (Charles) Ragland; great-grandchildren: Eric McGee, Paityn McGee, Kylie Davis, Mya Spradlin, Hayden Spradlin, Olivia Phelps, Hannah Phelps and Madison Ragland; brothers: Lowell McGee, Harold McGee and Noble (Janet) McGee; sister: Peggy Forby; and sisters-in-law: Violet (Amos) Covington and Anna Mary (Everett) Rushing. Funeral Services for Philip McGee will be Saturday, January 15, 2022 at 11:00 am in Union Hill Christian Church, Carbondale. Interment will follow in Lipe Cemetery in Makanda. Visitation will be from 10:00 am until the hour of service at the church. In lieu of flowers, memorials can be made to the Union Hill Christian Church and/or Lipe Cemetery and will be accepted at the services. Crain Pleasant Grove-Murdale Funeral Home is in charge of arrangements.

On January 11, 2022, Philip Dee McGee left his earthly home to join his wife in his Heavenly home with family all around at Memorial Hospital of Carbondale. He was born on May 21, 1935 in Grassy Township in Williamson County, Illinois to Lois... View Obituary & Service Information

The family of Philip Dee McGee created this Life Tributes page to make it easy to share your memories.

Send flowers to the McGee family.