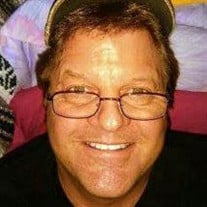 Randall Lee Newlin, age 60, of Herrin, Illinois, passed away on Friday, January 15, 2021. Randy was born on September 19, 1960 in Herrin, the son of Edward Gale and Glenda Lou (Garagiola) Newlin. He spent nearly his entire working career in sales and advertising. Randy was of the Christian faith and was an avid collector of antiques. He enjoyed fishing, traveling, playing golf and spending time with his family and friends. When his children were young, he especially cherished family gatherings and time spent together during the holidays. Survivors include his daughters, Dr. Katy Newlin and Jessica Newlin; his mother, Glenda Newlin; two sisters, Kelly Ann Newlin and Kim (Jay) Manion; two nieces, Tori Masterson and Olivia Vettasso; and numerous cousins, other relatives and many friends. He was preceded in death by his maternal grandparents, Herman and Juanita Garagiola; paternal grandparents, Ralph and Pauline (Toler) Newlin; his father, Edward Gale Newlin; and one uncle, Danny Newlin. Funeral services will be held at Crain Funeral Home – Egyptian Chapel, Energy, Illinois, on Tuesday, January 26, 2021 at 2:00 p.m. with Reverend Mark Goldman officiating. Interment will follow in Egyptian Memorial Gardens. Visitation will be held at Crain Funeral Home – Egyptian Chapel from 12:00 p.m. until the time of service. For those who prefer, memorials may be made to First Baptist Church of Herrin and will be accepted at the funeral home.

The family of Randall Lee Newlin created this Life Tributes page to make it easy to share your memories.

Send flowers to the Newlin family.