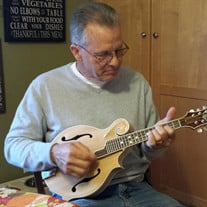 Raymond David Youngberg passed away peacefully in his home at 4:30 p.m. on March 6th, 2022. He was 73 years old. Dave was born in Aurora, Illinois, on February 20th, 1949, to Raymond C. and Elizabeth “Betty” Youngberg. Dave is survived by his loving wife, Karen Youngberg, of almost 40 years. Dave had three children, Lucas and his wife Ashley, Joe and his wife Rachelle, and Kati. Dave was the proud grandpa of 8 grandchildren; Lacey, Lily, Abigail, Abel, Jamir, Joey, Xara, and Daxton. Dave served 30 years as a Deputy Sheriff with the Jackson County Sheriff’s Department. During his tenure, Dave served as a jailer, a deputy, a detective, and a Sergeant. He retired in 2009. In his college days, Dave developed an interest in folk music. In one of his courses, Dave made his first banjo out of a salad bowl. From here, Dave developed a passion for making banjos, and became a luthier. After college, Dave worked at Golden Frets in Carbondale, Il, where he began to refine his skills as a luthier. Upon his retirement from the Sheriff’s Department, Dave built a shop, and dove back into his passion for making banjos. As his skill grew, he began making mandolins. He continued his craftsmanship for many years up until the time of his death. It was Dave’s wish to be cremated immediately following his death. A memorial gathering will be held at Crain Pleasant Grove-Murdale Funeral Home, 31 Memorial Drive, Murphysboro, IL on Sunday, March 20, 2022 from 2:00 p.m. until 4:00 p.m. A memorial service will follow at 4:30 p.m. at the funeral home. In lieu of flowers, the family requests with gratitude that memorial contributions be made to St. Francis Animal Shelter. Envelopes will be available and accepted at the funeral home. Crain Pleasant Grove-Murdale Funeral Home has been entrusted with the arrangements.

The family of Raymond David Youngberg created this Life Tributes page to make it easy to share your memories.

Raymond David Youngberg passed away peacefully in his home at...

Send flowers to the Youngberg family.