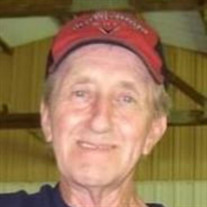 Richard William Morrison, age 76, of Orient, Illinois, formerly of Iuka, Illinois passed away at 9:15 AM on Wednesday, May 12, 2021 in the Veteran’s Affairs Medical Center in Marion. He was born on October 30, 1944 in Iuka, Illinois to William Edgar and Leota Ethel (Fear) Morrison. Richard was a veteran of the United States Army where he served for 2 years, stateside, during Vietnam. He was a jack of all trades and could fix just about anything. He worked in construction, electrical, plumbing, welding and various other types or work. Richard was also a tower guard for the Joliet State Prison. He was a member of the Masons, serving in Iuka, Illinois. He loved hunting and fishing, riding his side by side UTV, mowing and target practicing. He was known to be an excellent shot. Richard is survived by 4 children, Sherry (Brent) Simpson of Orient, IL, Michael (Denae) Morrison of Xenia, IL, Jennifer (Mark) Miller of Wayne City, IL and Dustin (Fiancé Dani) of St. Louis, MO; 11 grandchildren, David Villalobos Jr., Ashley Villalobos, Kalee Davis, Jase Riggs, Madison Morrison, Whitney Morrison, Brayden Morrison, Luke Miller, Tiffany Borgman, Shayla Miller and Isaiah Miller; 10 great grandchildren and many nieces, nephews, other relatives and friends. He was preceded in death by his Grandmother, Gladys Flo Morrison; Parents; Siblings, Bobby Joe Morrison and Sharron Ann Morrison; and his beloved companion, Artie the dog. Cremation will be accorded. There will be no services. Memorials may be made to the VA Medical Center hospice care wing in Marion, Illinois.

Richard William Morrison, age 76, of Orient, Illinois, formerly of Iuka, Illinois passed away at 9:15 AM on Wednesday, May 12, 2021 in the Veteran&#8217;s Affairs Medical Center in Marion. He was born on October 30, 1944 in Iuka, Illinois... View Obituary & Service Information

The family of Richard William Morrison created this Life Tributes page to make it easy to share your memories.

Send flowers to the Morrison family.