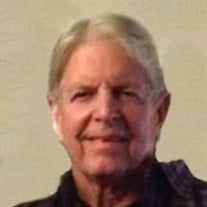 Robert R. (Bob) Dawson, Jr., age 73, of rural Anna passed away at 5:10am on Sunday, March 28, 2021, at Barnes Jewish Hospital in St. Louis, Missouri surrounded by his family. He was born on April 2, 1947, in St. Louis, MO, the son of Robert Richard and Wanda (Winsel) Dawson, Sr. The Lord blessed our small family with Bob in 1967. His personality was unique and infectious. He proudly served his country in Vietnam from 1969-1970. He served with the 25th Infantry Division as an M-60 gunner and was wounded while on patrol around Cu-Chi where he earned his Purple Heart and Combat Infantry Badge. When Bob returned from the war, he joined the IBEW Local 702 and started a career as an electrician at Belcher Electric in Anna. After his career at Belcher, he was then a foreman on the electrician’s crew at Southern Illinois University where he retired in 2009. Bob earned a reputation as one of the best electricians in the area. There was never a problem that he could not fix. He was a perfectionist and a master trouble-shooter. Every person that met Bob loved and respected him. In the electrical field, the common phrase was “CALL DAWSON” for a problem that could not be solved. Bob loved his country, worshiped his family and was everyone’s friend. His hobbies included hunting, fishing, basketball and helping anyone with a problem they couldn’t solve. He was the absolute cornerstone and foundation of this small family. He will be missed every hour of every day by all of us. The Lord gained a warrior and a talented man. PFC Robert R. Dawson is standing in formation in Valhalla. We will meet again. He is survived by his wife of 51 years, Jean; son, Brad (Samantha) Dawson of Anna; daughter, Amanda (Cory) Kelley of Beaufort, SC; grandchildren, Kayma and Sawyer Dawson; sister, Sharon (Ray) McBride of Park Hills, MO; brother-in-law, Chip (Patty) Young of Anna; nephews, Dustin (Marissa) Young, Dylan Young, Robert (Mindy) McBride; and Baby, his beloved dog. He was preceded in death by his parents and niece, Rayanne McBride-Smith. At his request, no services will be held. In lieu of flowers memorial donations may be made to The Vietnam Veterans of America by visiting their website, www.vva.org or by mail at 8719 Colesville Rd. Suite 100, Silver Spring, MD 20910. Crain Funeral Home in Anna-Jonesboro has been entrusted with the arrangements.

The family of Robert R. (Bob) Dawson created this Life Tributes page to make it easy to share your memories.

Send flowers to the Dawson family.