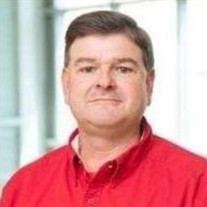 Robert Ward “R.W.” McAlister, age 49, of Jonesboro, passed away at 8:16 p.m. on Thursday, October 7, 2021 at Southeast Missouri Hospital. He was born on October 5, 1972, the son of Bob and Kristie (Dillow) McAlister. R.W. served as minister of the Anna Church of Christ. He worked as an Ag Instructor at Southeast Missouri State University and also a farmer. R.W. also served on the school board at Jonesboro Elementary for several years. Survivors include his wife, Renee McAlister; his daughters, Katie (Elijah) Boren and Holly (Lee) Tellor; a son, Jason McAlister; his mother, Kristie McAlister; a brother, Bryan (Mendy) McAlister; several uncles, aunts, nieces, nephews, cousins, friends, and other relatives. R.W. was preceded in death by his father, Robert (Bob) McAlister; a sister, Amy McAlister; his paternal grandparents, Robert and Irene McAlister; and his maternal grandparents, Ward and Virgie Dillow. Visitation will be held on Sunday, October 10, 2021 from 4:00-8:00 pm at Crain Funeral Home in Anna. Funeral Service will be on Monday, October 11, 2021 at 10:00 am at the Anna Church of Christ with his brother, Bryan McAlister officiating. Interment will immediately follow at St. Johns Cemetery. Memorial contributions can be made to Paragould Children’s Home, SEMO Ag Department, or the Southeast Hospital ICU. Envelopes will be provided at the funeral home. Crain Funeral Home in Anna-Jonesboro is entrusted with arrangements.

The family of Robert Ward "R.W." McAlister created this Life Tributes page to make it easy to share your memories.

Send flowers to the McAlister family.