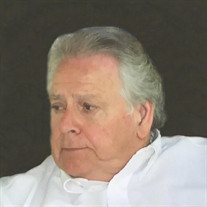 Robert Lee Moss, age 80, of Cape Girardeau, formerly of Dutchtown, passed away on Saturday, August 29, 2020. He was born June 18, 1940 in Illinois to Alfred Lee Moss, Jr. and Pauline Dunn Moss. On July 28, 1958 he married Shirley Ann Blaylock in Cape Girardeau. Bob was a self-employed care salesman in the 60’s and owned Cahokia Quality Auto Sales in Cahokia, IL. While living in Cahokia he was also involved in a country music show called The Midwest Jamboree which featured rising stars such as Barbara Fairchild and others. In 1970 the family relocated to Illmo/Scott City, MO. He became a disc jockey for KZYM country station. He later became the manager of Montgomery Mobile Homes in Blomyer, MO. It was during this time that he became the booking manager for the local gospel group The Singing Faithmen. He started a radio program called Cowboy Church and recorded 1-hour programs that were aired weekly on KZYM, KYMO and KJAS radio stations. Bob was a big supporter of gospel music. He started Faith Enterprises and through this company managed gospel groups such as The Songmasters of Milan, TN, Lew Rhodes and The Masters IV, Harold Mills and The Soul Searchers, Sheppard’s Quartet and more. In 1974 he started The Liberty Quartet. It was through this ministry that many lives were led to the Lord throughout Southern Illinois and Southeast Missouri and beyond. In 1979 he started promoting a gospel supper club in East Cape, IL at Rosie’s Family Restaurant where both local and professional gospel groups played. Bob is survived by his loving wife, Shirley Moss of Cape Girardeau; a son, Al (Teri) Moss of Fredericktown; 3 daughters, Tami Underwood of Jackson, Paula (Skip) Holman of Wappapello, Betty Lampe (Jeff King) of Gordonville; a sister, Shirley (Dave) Kellick of Shook; 12 grandchildren, Bobby (Bekky) Underwood, Matt (Julie) Underwood, Darrin (Ellie) Underwood all of Scott City, Tim (Lacey) Moss, Allison (Curtis) Cureton, Andy (Taylor) Moss all of Fredericktown, Eric (Julianne) Holman, Heather Holman, both of Poplar Bluff, Brittany (Allen) McClellan of Wappapello, Travis (Shayna) Craft of Cape Girardeau, Kevin (Carol) Craft of Oak Ridge, Kelsi (Richard) Craft of Benton; 22 great grandchildren; other relatives and a host of friends. He is also survived by his constant companion and fur baby, Macy. He was preceded in death by his parents, an infant brother, Larry Don Moss and a son-in-law, aunts and uncles. Funeral services for Bob will be held at 1:00pm on Wednesday, September 2, 2020 at McKinney Chapel near Lake of Egypt with Buck Proffer officiating. Interment will follow at McKinney Chapel Cemetery. Visitation will be from 11:00am until the hour of the service at McKinney Chapel. Crain Funeral Home and Cremation Service in Cape Girardeau is in charge of arrangements.

The family of Robert Lee Moss created this Life Tributes page to make it easy to share your memories.

Send flowers to the Moss family.