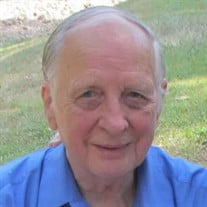 Rev. Roger Christiansen, age 87, of Cape Girardeau, met his Savior on Friday, November 20, 2020 at Saint Francis Medical Center, surrounded by his wife and children. He was born on September 7, 1933 in Pine Township in Montcalm County, Michigan to Clarence and Myrtle Elizabeth (Slocum) Christiansen. He married the love of his life, Twyla Loretha McCollough, in Anderson, Indiana on April 14, 1962. They were married over 58 years. Roger served his country in the United States Army where he earned a National Defense Service Medal and Army of Occupation Medal. He later graduated from Anderson College in Anderson, Indiana with a Bachelor of Arts degree in Bible and Psychology. Roger went on to serve the Lord in ministry with the Church of God (Anderson) for over 50 years, pastoring churches in North Carolina, Tennessee, Illinois, Michigan, Indiana and Missouri. Roger was a man of sincere faith who lived it out in his selfless service and care of others. Even after retirement, he remained active in church life through serving on boards and preaching monthly at Cape Community Church. Until his recent illness, he faithfully volunteered each week at the Cape Girardeau Senior Center delivering meals to the elderly. Roger delighted in his family and loved them well. Roger always made himself available to his family through his steadfast care for his wife and by giving genuine attention to his children and their families. He had a contagious laugh, enjoyed playing games, and was not afraid of being goofy with those he loved. He was very loved and will be deeply missed. He is survived by his wife, Twyla Loretha Christiansen of Cape Girardeau; two daughters, Valerie Gail (Mark) Ramsey of Cape Girardeau and Angela Ruth (Sean) McDeavitt of Bryan, TX; one son, Paul Keith (Niki) Christiansen of Sioux Falls, SD; 12 grandchildren; 12 great-grandchildren; two brothers, Richard (Jackie) Christiansen of Ionia, MI and Clarence (Mary Lou) Christiansen of Roscoe, IL; one brother-in-law, Cecil Mathewson of Belding MI; many other relatives and friends. Roger was preceded in death by his parents and beloved sister, Laverna Mathewson. Visitation will be held from 11:30 AM to 1:00 PM on Tuesday, November 24, 2020 at Crain Funeral Home & Cremation Service in Cape Girardeau. A private funeral service will be held at 1:00 PM on Tuesday, November 24, 2020 at the funeral home for family and his Cape church family, with Rev. Gene Moses officiating. In an effort to avoid a large crowd, all others are invited to share in the funeral service through a livestream via Facebook on the Crain Funeral Home & Cremation Service Facebook page. Burial with full military honors will follow in Cape County Memorial Park. Memorial contributions may be made to Cape Community Church or Cape Girardeau Senior Center and will be accepted at the funeral home. Envelopes will be available. Crain Funeral Home & Cremation Service in Cape Girardeau is in charge of arrangements.

Rev. Roger Christiansen, age 87, of Cape Girardeau, met his Savior on Friday, November 20, 2020 at Saint Francis Medical Center, surrounded by his wife and children. He was born on September 7, 1933 in Pine Township in Montcalm County, Michigan... View Obituary & Service Information

The family of Rev. Roger Christiansen created this Life Tributes page to make it easy to share your memories.

Send flowers to the Christiansen family.