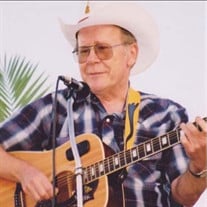 Ronnie Ray Gulley was called to his heavenly home on October 4, 2021. He was born August 10, 1937, to Elmer and Demovah Gulley, who preceded him in death along with a brother, Darrell. He is survived by a son, Michael Gulley (Tricia) of Cincinnatti, Ohio; a daughter, Sheryl Brenningmeyer (Dennis) of Goreville, Illinois; four grandchildren, Jennifer Albracht (Derek) of Waterloo, Illinois, Katie Galvin (Josh) of Cincinnatti, Ohio, Adam Brenningmeyer (Rachel) of Goreville, Illinois and Aaron Brenningmeyer (Mary) of Carbondale, Illinois; and six great-grandchildren. He attended high school in Ullin, Illinois and after graduating went to work for the Florsheim Shoe factory in Anna, Illinois. After it closed its doors, he transferred to the factory in Cape Girardeau, Missouri to finish out his 43 years of making shoes. On May 22, 1959, he married the love of his life, Doris Schnaare, in Wetaug, Illinois and it was there that they built a beautiful life of 62 Years. Their house was always welcoming to anyone who entered and love was always shown along with a hug. Ronnie had two passions that were very evident, his love for music and especially his love for ministry. He ministered at the Church of Christ at Wetaug, Illinois for many years, as well as filling in at various churches in Southern Illinois. In 2007, he became minister at Park Street Church of Christ in Metropolis, Illinois up until 2019 when his health wouldn’t allow it. He loved spreading the Good News of the Gospel and God’s love to those he came in contact with. Singing was his other passion and we’re sure he’s in Heaven leading the angels in singing praises to God. One song he was always asked to sing at the area-wide singing was “God’s Family,” and that’s where he was most at home, with Gods Family. Ronnie also loved singing Country Music and was in several bands over the years that played at nursing homes, festivals, ice cream socials, and homecomings. Also, every Friday night you would find him playing music at an area jam session with anyone who wanted to participate. Ronnie loved life and he and Doris were always on the go. They truly loved being with people. Ronnie also had a love of baseball and was an avid St. Louis Cardinal baseball fan and he also coached his sons khoury league team for many years. Ronnie will be deeply missed by his family and his friends. Visitation will be held at Crain Funeral Home in Ullin on Wednesday, October 6, 2021 from 5:00 p.m. until 7:00 p.m. and again on Thursday, October 7, 2021 from 10:00 a.m. until the hour of service. Funeral services will be held at Crain Funeral Home in Ullin on Thursday, October 7, 2021 at 11:00 a.m. Burial will follow in Christian Chapel Cemetery. In lieu of customary remembrances, the family suggests memorial donations be made to the Robert Cheek Memorial Community Center. Envelopes will be available and accepted at the funeral home. Crain Funeral Home in Ullin has been entrusted with the arrangements.

Ronnie Ray Gulley was called to his heavenly home on October 4, 2021. He was born August 10, 1937, to Elmer and Demovah Gulley, who preceded him in death along with a brother, Darrell. He is survived by a son, Michael Gulley (Tricia) of Cincinnatti,... View Obituary & Service Information

The family of Ronnie R. Gulley created this Life Tributes page to make it easy to share your memories.

Ronnie Ray Gulley was called to his heavenly home on October...

Send flowers to the Gulley family.