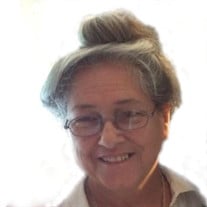 Ruby Bierschwal, age 70, of Cape Girardeau, passed away on Saturday, November 27, 2021 at Southeast Missouri Hospital. She was born on March 19, 1951 to William and Pearlene (Davis) Hannah in East Prairie, Missouri. Ruby married William Hunter Bierschwal on December 2, 1967, and he preceded her in death on September 21, 2021. Ruby worked as a CNA for Heartland Care and Rehab for several years. Previously, she had worked for Thorngate Clothing Factory and Ralph Edwards Factory, both in Cape Girardeau. Ruby had been a member of the Northside Gospel Assembly Church since the 1960’s. She loved gardening and flowers. Survivors include her two sons, Billy (Tracy) Bierschwal and Danny Bierschwal; a daughter, Tammy (James) Sides; four grandchildren, Brandon Bierschwal, Teddy Bierschwal, Taylor Sides, and Cody (Morgan) Price; three great-grandchildren, Macy Bierschwal, Peyton Price and Rylie Bierschwal; two sisters, Pamela Rorai and Kathy Fowler; two stepsisters, Kathy Hannah and Cheryl (David) Carter; and several nieces, nephews, cousins, and other relatives. She was preceded in death by her husband, William; her parents; two brothers, David Hannah and Rocky Hannah; and a sister, Carolyn Linhart. A service will be hosted by the family at the Northside Gospel Assembly Church on Sunday, December 5 at 11 a.m. Officiating will be Bro. Winford Wren. In lieu of flowers, memorial contributions may be made to the family. Arrangements have been entrusted to Crain Funeral Home and Cremation Service in Cape Girardeau. To view the obituary and/or to leave an online condolence for the family please visit www.crainsonline.com

The family of Ruby Bierschwal created this Life Tributes page to make it easy to share your memories.

Ruby Bierschwal, age 70, of Cape Girardeau, passed away on Saturday,...

Send flowers to the Bierschwal family.