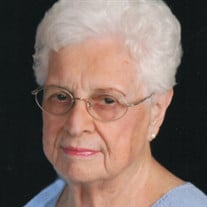 Shirley Ann Karraker, age 92, of Cape Girardeau, Missouri, formerly of Johnston City, Illinois, passed away on Sunday, December 19, 2021 at 4:15 a.m. at Ratliff Care Center in Cape Girardeau. Shirley was born on September 19, 1929 in Johnston City, a daughter of John and Thelma (Williams) Beaver. She and Richard Karraker were married on June 6, 1959 in First Baptist Church in Johnston City, and he preceded her in death on April 24, 2014. Shirley graduated from Johnston City High School in 1947. After high school she entered the School of Nursing at Christian Welfare Hospital in East St. Louis, Illinois, graduating in September of 1950. She worked at the V.A. Medical Center in Marion, Illinois for nine years. After her marriage, she moved to Cape Girardeau and was employed at Southeast Hospital for thirty-five years. She worked in many different departments throughout her time there and retired in 1994. Shirley was a member of Lynwood Baptist Church and sang in the choir there for many years. Survivors include her son, Tim (Julia) Karraker of Cape Girardeau; grandchildren, Thomas Karraker of Cape Girardeau and Rachel (David) Wynn of South Fulton, Tennessee; one great-grandson, Levi Wynn; a sister, Phyllis Sanders of Johnston City; a brother, John A. Beaver of Johnston City; four nieces; and a nephew. She was preceded in death by her parents; her husband, Richard Karraker; and a sister, Joy Beaver. Funeral Services will be held at Crain Funeral Home in Cape Girardeau on Wednesday, December 22, 2021 at 10:30 a.m. with Reverend Wavis Jordan officiating. Burial will follow at 1:00 p.m. at Missouri Veteran’s Cemetery in Bloomfield. A time of visitation will be held at the funeral home from 9:00 a.m. until services. In lieu of customary remembrances, the family requests memorial contributions be made to the Lynwood Baptist Church or St. Jude Children’s Research Hospital. Envelopes will be available and accepted at the funeral home. Crain Funeral Home & Cremation Service of Cape Girardeau has been entrusted with the arrangements.

The family of Shirley Karraker created this Life Tributes page to make it easy to share your memories.

Send flowers to the Karraker family.