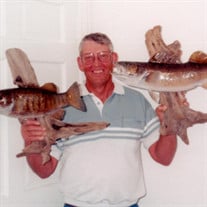 Ted Perry, age 82, of Murphysboro, passed away on Friday, February 11, 2022 at 5:45 p.m. at his home. Ted was born on August 15, 1939 in Murphysboro, a son of Ralph and Irene (Sarensen) Perry. He married Marilyn Dale on June 17, 1961 in Centenary Methodist Church in Murphysboro and she survives. Ted proudly answered the call of his nation and served in the United States Army. Ted first worked as a butcher, and in 1969 he became the owner and operated Ted and Gene’s Grocery in Murphysboro. He enjoyed gardening and was an avid hunter and fisherman. Ted was a shareholder and member of the Murphysboro Canada Club and was a member of the Murphysboro United Methodist Church. Survivors include his wife, Marilyn Perry of Murphysboro; seven sisters, Betty (Peter) Hand of Murphysboro, Shirley Watson of DuQuoin, Patricia Heape of Manchester, Missouri, Ruth (Loyd) Ebersohl of Murphysboro, LaDonna (Sonny) McGehee of Collinsville, Pam (Charles) Crews of Murphysboro and Marilyn Sue (Stephen) Williams of Murphysboro; two sisters-in-law, Gloria Perry of Murphysboro and Vicki Tripp of Dongola; and numerous nieces, nephews, cousins, other relatives and friends. He was preceded in death by his parents; a sister, Juanita Hickman; and a brother, Ralph Perry, Jr. Funeral services will be held at Crain Funeral Home, 1421 Walnut Street, Murphysboro, on Friday, February 18, 2022 at 1:00 p.m. with Reverend Marty McMichael and Reverend Louis Frick officiating. Burial will follow in Mount Joy Cemetery. A time of visitation will be held at the funeral home on Friday from 11:00 a.m. until the hour of service. In lieu of customary remembrances, the family requests with gratitude that memorial contributions be made to Murphysboro United Methodist Church. Envelopes will be available and accepted at the funeral home. Crain Funeral Home in Murphysboro has been entrusted with the arrangements.

The family of Ted Perry created this Life Tributes page to make it easy to share your memories.

Ted Perry, age 82, of Murphysboro, passed away on Friday, February...

Send flowers to the Perry family.