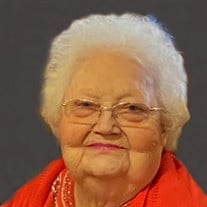 Verna Louise Aden, 88, of Marion, formerly of Dongola, passed away on Saturday, January 29, 2022 at 10:02 a.m. at the Voyage Senior Living in Anna with her loving family by her side. Verna was born on November 12, 1933 in Perks, Illinois the daughter of Marshall and Bertha (Wright) Ramage. She married Charles Aden on July 13, 1952, and he preceded her in death on April 8, 2004. Verna was proud to be a Certified Nurse Aide, she spent her working years at Marion Memorial Hospital. She enjoyed water aerobics, reading her favorite books, and keeping in touch with the elderly by sending cards. She was a member of the Seventh Day Adventist Church in Marion. She was a mother and friend to everyone. She dearly loved her grandchildren and great grand-children. Survivors include her sons, Jeff (Sharon) Aden of Dongola, Randy (Susan) Aden of Anna, Shaun (Kelly) Aden of Dongola, Paul (Christine) Aden of Dongola; grandchildren, Aaron (Ashlea) Aden, Breanna (Landon) Lingle, Clay Aden, Jessica (Eric) Hoffman, Joshua (Amber) Aden, Shea (Kevin) Koone all of Dongola, Brandi (Jeremy Smith) Aden of Carterville, Lauren (Kaleb) Green of Marion, Arkansas, Nicholas Aden (Evelyn) of Carbondale; step-grandchildren, Hillary (Cale) Wiseman of Albion, Adam (Brittney) Hoffner of Dongola, Kyle Goodwin of Goldsboro, North Carolina, Tim Goodwin of Lincoln, Illinois 27 great grandchildren; sisters, Joann Lessar, Rita Ramage of Elco, Annie Rosson of Jonesboro; special friend, Maryilyn Cagle of Marion and a host of nieces, nephews, cousins, other family members and friends. She was preceded in death by her parents; husband; son, Nathan Aden; brothers, Ralph, Lewis, Homer, Howard, Harvey, Elmer James Ramage; sisters, Agnes Eddleman, and Ruth Stone. Funeral services will be held on Tuesday, February 1, 2022 at 2:00 p.m. at Crain Funeral Home in Dongola with Pastor Dale Barnhurst officiating. Visitation will be held on Tuesday, February 1, 2022 from 10:00 a.m. until the time of service. Interment will take place in Meisenheimer Cemetery. Crain Funeral Home in Dongola has been entrusted with the arrangements. In lieu of flowers, memorials may be made to Meisenheimer Cemetery and will be accepted at the funeral home.

Verna Louise Aden, 88, of Marion, formerly of Dongola, passed away on Saturday, January 29, 2022 at 10:02 a.m. at the Voyage Senior Living in Anna with her loving family by her side. Verna was born on November 12, 1933 in Perks, Illinois the... View Obituary & Service Information

The family of Verna Louise Aden created this Life Tributes page to make it easy to share your memories.

Send flowers to the Aden family.