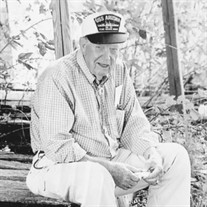 Vincent Moran “Red” Doss, 96, of Cairo, died at 9:19am Monday, Dec. 14, 2020 at Veteran’s Affairs Medical Center Long Term Care in Marion. He was born Feb. 29, 1924 at Mitchellsburg, KY, the son of Arthur and Mollie (Lamb) Doss. He was married to LaVelle Morris and she preceded him in death May 28, 1980. He served his country honorably in the US Army during World War II. After his military service, Red’s first job was with Kemmons Wilson, who later founded Holiday Inn. This was where Red was introduced to the amusement machine business. He and LaVelle moved to Cairo in 1952, where Red started a prominent amusement machine business, as well as a record store, night clubs, restaurants, and a hotel. His fraternal affiliations were with the Masons, Shriners, Scottish Rite Bodies, and the Eagles. He was the last surviving founder of the Alexander County Airport Authority and was still serving on the board at the time of his death. He was a 50 year member of the Aircraft Owner & Pilots Association. At age 93, the Federal Aviation Administration bestowed upon him the Wright Brothers Master Pilot’s Award. Survivors include his two sons, Edward (Nancy) Doss of Mounds and Steven (Lisa) Doss of New Orleans, LA; 2 grandchildren, Burton (Angie) Doss of Madison, MS and Adelaide Doss of New Orleans, LA; 2 great grandchildren, Jackson Doss and Harper Doss both of Madison, MS; 1 sister, Imogene McKinstry of Louisville, KY; nieces, nephews, other relatives and friends. Besides his wife and parents he was preceded in death by 11 siblings. Due to the limitations on gatherings by the State of Illinois, Red’s visitation and services will be held at Crain Funeral Home, 829 N. West End Blvd, Cape Girardeau, MO, where visitation will be from 4-7 on Thursday, Dec. 17, and 10-11 Friday, Dec. 18. Funeral services will follow at 11am Friday with Rev. Larry Potts officiating. Interment with military honors will follow at 1:00pm at Green Lawn Memorial Gardens at Villa Ridge. Crain Funeral Home in Cairo is in charge of arrangements.

The family of Vincent Moran "Red" Doss created this Life Tributes page to make it easy to share your memories.

Send flowers to the Doss family.