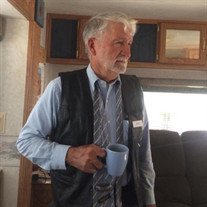 William Earl Sharp, age 85, of Liberty , MO, died in Sun City, AZ on January 27,2021, at 7:42 a.m. He was born April 17, 1935 in Union County, IL, at home, to Mildred I. Miller Sharp and Homer Earl Sharp. They moved to East Peoria, IL in the 40’s. William graduated East Peoria High School in 1953. Mr. Sharp served his country in the Navy with an honorable discharge. He married Ruth Blair in 1956. They had two sons, William Brian and Philip Andrew Sharp. In 1978, he married Patricia L. Pontius Sharp, who had a daughter, Ann Marie. Patricia survives in the home. William worked at Xerox for 30 year as a service technician. They moved to Missouri where he retired from Xerox and bought a farm and took up farming for the next 23 years before he retired to Liberty, MO in 2011. William was a member of Nebo Baptist Church, Liberty, MO. He is survived by his wife Patricia; son, Wm. Brian (Jodie); daughter, Ann Marie Sharp Wright; one sister, Connie Hazard of Virginia; six grandchildren; seven great-grandchildren; and nieces and nephews. His son, Philip Andrew; his parents, Mildred and Homer Sharp; and three sisters, Shirley Geier, Vanita Roberts and Mary Lee Sharp preceded him in death. Graveside memorial services will be held at the Anna City Cemetery, E. Davie Street, Anna, Illinois on April 17th 2021 at 1:00 p.m. Crain Funeral Home of Anna has been entrusted with the arrangements.

The family of William E. Sharp created this Life Tributes page to make it easy to share your memories.

Send flowers to the Sharp family.